17 Nov, 2014, Oliver wrote in the 1st comment:
Votes: 0
The approach I see most often on MUDs when it comes to 'area design' is the linear approach; roads have cross-streets that are navigable with points of interest, areas of PvE content are accessible through mostly linear travel that scales in complexity usually with the reward and difficulty of the content.

I'm trying to go about things slightly differently and design a world with areas that are almost entirely navigable– large open spaces of terrain like you might find in a graphical open-world game. One of the biggest problems I've encountered with this idea in my game and other games that have done similar things is that a player has the feeling of a "frictionless plane" so-to-speak when you plop them in a wide-open area.

We know that most players pay only cursory attention to the descriptions in rooms that are meant to be traversed through, and so writing about the landscape can only do so much when a player is typing "east east east." After so much of this, the player becomes understandably bored, and even if the passing features might be interesting on a graphical game, typing east gets boring fast on a MUD.

So I have for some time wondered to myself: what can I implement that slows a player down and gives them a more immersed experience of traveling through landscape? Adding elevation, impassable geography, et cetera can help with this I believe, because it helps players form a sort of "mental map" of the actual area that they're in as opposed to forming a "mental map" of 20 x 20 practically blank rooms. Adding travel time can help too, I think, and maybe depending on the distances traveled, forcing players to choose places to rest is another useful tool I've seen (usually in the form of making the area very dangerous at night, necessitating a certain understanding of the lay of the land when nighttime approaches).

Has anyone else contemplated this? Are any of my observations off (they are yet untested and purely anecdotal). 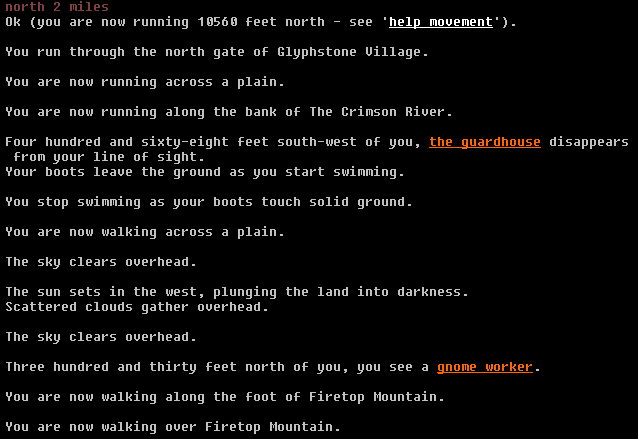 And here's an example of elevation (the last sentence, where you can see distant terrain rising above your current terrain):

Another thing I was thinking of last night is a different approach to combat that may have some application here. Basically, for a majority of mob fights, I know in advance if I'm going to win or not. The only real variables are how much HP / MP I want to expend winning; i.e. I may handily polish off a mob as a mage but maybe I wanted to save that mana for a future fight. The passage of time during combat allows for emergent behavior to tip the balance - say an aggro or a friendly mob walks into the room and takes my enemy's side. However it works out, I basically just function as an abstract state machine, watching to make sure nothing unordinary happens after I've committed myself to a fight… but it isn't really fun.

My thinking was that perhaps you could devise a way to resolve combat automatically through a method of combat that isn't round based but instead lets you bid in advance how much HP / MP you were willing to expend on any particular fight. The presumption for a mob is that they will fight to the death, and then we all know we can auto-calculate out the rounds that actually get you to a victory or failure. What if that all happened in the background and just a few interactive messages were shown as with KaVir's running example above?

Sorry if it seems like I'm off-topic, but I was bringing it around to this: what if in exploration I just set a number of movement points to expend or a time limit and then just wandered around for a bit. I could see the automatic messages as my character explored the surrounding area or in a particular direction, and perhaps I could either stop or just make note of areas of interest to directly navigate to them again in the future. The less fun part of having to slog through a wilderness reading room descriptions (or even to make sense of an automap) is reduced, and I get the same result… the appearance of moving around the land, maybe some visual representation of the areas of interest, and I suppose the ability to traverse the wilderness manually if I really wanted to.

Permalink Reply Quote Spawn Report Mark Unread Edit Delete
17 Nov, 2014, Oliver wrote in the 5th comment:
Votes: 0
KaVir said:
I covered this topic in a recent Imaginary Realities article as well, although the site seems to be down at the moment…

Nice. Here's a sample of the output my procedural generation system is currently generating:

Lobe-leafed oak trees have taken root here, somewhat spread apart.
Despite the thick mat of fallen leaves and grass, the earth is soft and
yielding, and rising from the ground, the smell of dead leaves and soft dirt
is everywhere.

The ground here has been riddled holes burrowed into the dark soil. The
slightest motion against the plethora of dead leaves nearby creates a loud
rustling, and grouped closely, birch trees with small pinnate leaves and
white bark grow here.

Exits: [north east south west]
A stand of large birch trees grows here.
A small mound of dirt surrounds a hole in the ground.
(Hide) A bristly and dense-furred gopher with large teeth and straw fur is here.